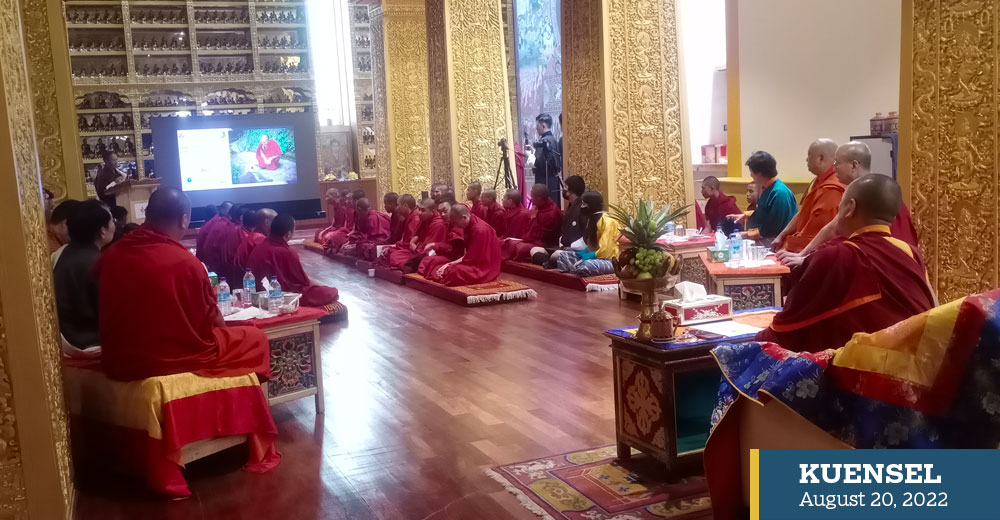 In an attempt to reduce wildlife trade demand, Bhutan Ecological Society launched a project called “Buddhist for Nature” yesterday at Kuenselphodrang in Thimphu.

The initiative is supported by the International Buddhist Confederation, NABU (Nature And Biodiversity Conservation Union) International Foundation for Nature, and Buddh Jyoti Foundation.

The project is a component of a broad awareness-raising effort in Southeast Asian nations. Mongolia and Vietnam will also conduct the programme.

The Buddhist for Nature project intends to connect people to the core Buddhist values such as compassion for all sentient beings, universal responsibility, interdependence, and behavioural changes related to the use of wild animals for food, and medicine, among others.

Bhutan is one of the world’s 10 most important biodiversity hotspots with 770 species of birds, 119 species of herpetofauna and 200 species of mammals. Between 2017-2020, 4,000 wildlife crimes were reported in Bhutan.

As per data from the Department of Forests and Park Services, between 2017-2021, Bhutan lost 25 Himalayan black bears, 24 sambar deer, 19 wild pigs, 10 musk deer, and eight tigers, among others to poachers.

Secretary for Environment and Conservation of the International Buddhist Confederation, Dr Barbara Mass said, “In the last 150 years, 82 percent of the wild mammal’s biomass and 40 percent of plant biomass got extinct.”

She said the wildlife trade is also harmful to health. “Around 70 percent of all emerging infectious diseases, as well as almost all pandemics, originate from animals. Some 65 percent of these can be traced back to wild animals.”

Dr Barbara Maas said there are currently an estimated 1.7 million undetected viruses in mammals and birds. “Of these, 540,000 to 850,000 may have the ability to infect humans.”

“The Buddha taught about the inseparable interconnectedness of the wellbeing of humans, animals, plants, and their shared environment more than 2,500 years ago,” Dr Barbara Maas said, adding that it is time to apply Buddha’s message of wisdom and compassion towards all.

Bhutanese scholar Dr Karma Phuntsho said that one of the reasons for the wildlife trade is due to the myth and superstition where people blindly consume certain animals believing that it has medicinal value.

Lopon Ugyen Namgyel from the Central Monastic Body said Buddhist sutras and tantras say that if there is no existence of wild animals, there is no source to accumulate merits. “Because of them, we are capable of getting rid of wrongdoing such as killing and harming.”

He said that many Bhutanese switching to vegetarianism in recent years is a sign of love and compassion for all sentient beings.

Bhutan Ecological Society officials said that coordinated and extensive national outreach through a volunteer network in pertinent districts and communities across the nation would be carried out in the next two years.