BES to establish a biogas plant in Memeylakha by next year 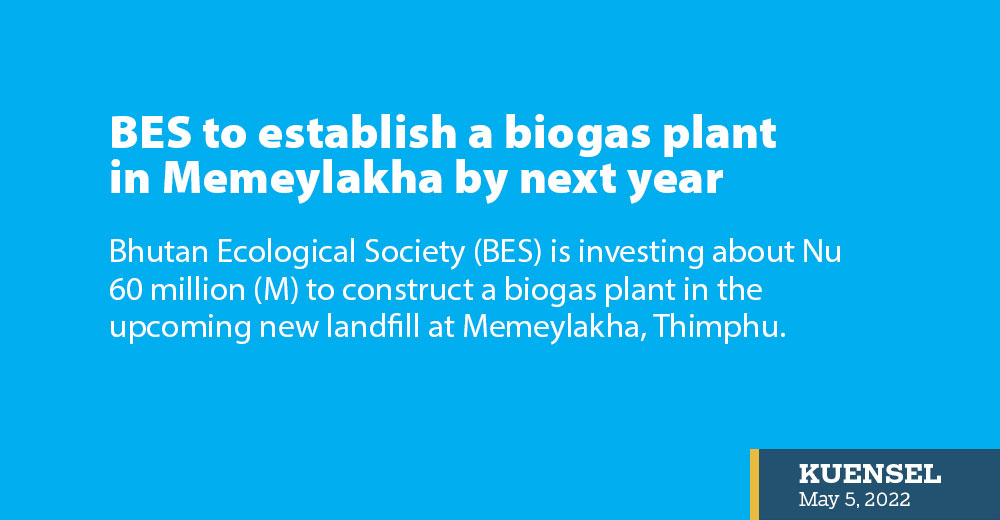 Bhutan Ecological Society (BES) is investing about Nu 60 million (M) to construct a biogas plant in the upcoming new landfill at Memeylakha, Thimphu.

NEC’s chief of waste division, Thinley Dorji, said that BES would be allowed to operate the plant for 10 years.

He said that biogas plant is environmentally friendly because methane from waste would be trapped and converted to liquefied petroleum gas, and its residue would produce bio-fertiliser.

The executive director of BES, Nawang Norbu, said that BES’ main goal was to improve waste management in the country. “We want to provide infrastructure such as biogas plant to encourage people to segregate waste. We cannot blame people for not segregating waste because infrastructures are not in place.”

He said that BES is looking forward to establishing the plant. “We are currently looking for additional funds and we are interested to invest in more biogas plant in other parts of the country in the future.”

The executive director said that there were many opportunities in establishing a biogas plant because waste could be optimally used to produce LPG and fertiliser our country imports.

According to a press release NECS sent, the initiative heralds a coordinated and unprecedented approach to managing wet waste generated in Thimphu besides canning biogas to reduce import of liquefied petroleum gas (LPG) and also churn out high-quality bio-fertilisers as by-product to reduce our dependence on synthetic fertilisers.

It also stated the MoU is expected to promote partnership and collaboration between the partner agencies to align with Bhutan’s Low Emission Development Strategy. “The project shall, in turn, contribute to the achievement of zero waste in Bhutan by diverting wet waste from the landfill.”

The top imported goods were mineral products including oil and fuel worth Nu 10.8 billion from India, according to Royal Monetary Authority’s annual report 2021,

Meanwhile, the plant will be a part of the national waste management flagship programme, where 48.7 acres of land is identified in Memeylakha to construct sanitary landfill, recycling plant, stockyard,, construction and demolition plant and incineration plant for integrated waste management facility.