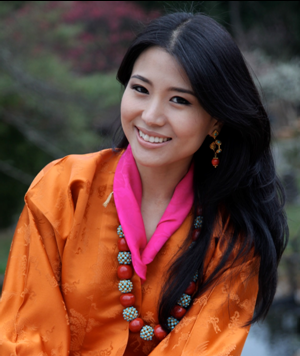 Deputy Minister and Special Advisor to the National Environment Commission, Dasho Paljor J Dorji, fondly referred to as Dasho Benji, is the Founding President of the Bhutan Ecological Society. Dasho served in various capacities in the Royal Government of Bhutan since 1966 and also established the Royal Society for Protection of Nature (RSPN), Bhutan’s first not-for-profit environmental organization, in 1987. He spearheaded the establishment of the Bhutan Trust Fund for Environmental Conservation. Dasho is a recipient of the Jigme Singye Wangchuck Environmental Stewardship Award for Policy Leadership in 2010.

Dr. Tashi is the Director General for the Department of Livestock under the Ministry of Agriculture and Forests. Dr. Tashi’s professional working career started as a civil servant for Royal Government of Bhutan in April 1991.

Ms. Kesang Choden Dorji is the Director General for the Department of Adult and Higher Education (DAHE). She began her career with the Royal Civil Service Commission in 1990.

Mr. Phento Tshering is the Director for the National Environment Commission. He began his career with the Royal Civil Service Commission; as a civil servant and has been in the service for the last 22 years.

Mr. Mewang Gyeltshen is the Director for the Department of Renewable Energy under the Ministry of Economic Affairs, Royal Government of Bhutan. Mr. Gyeltshen has been working in the Energy Sector for the last 25 years in various capacities and has been very active for the formulation of various policies, regulations and programs for the renewable energy sector in the Country.

Dr. Nawang Norbu (PhD) joined Bhutan Ecological Society in 2017 after having served as Director of the Ugyen Wangchuck Institute for Conservation and Environment. He was the pioneer for the establishment of society while at the institute in 2010. As a Director at the UWICE, he helped convene the Climate Summit for A Living Himalayas, a process that brought together civil society, academics and Government representatives from Bangladesh, Bhutan, India and Nepal culminating in the signing of the agreement in November 2011 to adopt a framework action plan to adapt to climate change. He also initiated the establishment of the School for Field Studies (SFS) in Bhutan. Prior to working at the institute, he also served as Park Manager for the Phrumsengla National Park where he led the drafting of a 5-year management plan for the park and also the adjoining biological corridor.

Josh grew up in Chicago and developed an interest in ecology through backyard birds and summer vacations to national parks across the western US. He began his research career at the University of Montana, studying songbirds and several species of large mammals, including the leopards and tigers of Bhutan. After sticking around in Montana following his BS, he moved to the University of California, Riverside to complete his PhD, studying coexistence in the freshwater fish communities in the mountain streams of Trinidad. Throughout my diverse research projects, I aim to use strong quantitive techniques to unravel the complexity and diversity of ecological systems. When not in the field or crunching numbers, I enjoy running, biking, hiking and taking pictures.

Mr. Ugyen heads the Administration & Finance department for the Bhutan Ecological Society. He holds a certificate in General Forestry & Conservation from Bhutan Forestry Institute, Thimphu. Prior to Joining the society in 2017, he worked as a research field assistant with the Ugyen Wangchuck Institute for Conservation and Environmental Research for nine years. Ugyen also served Thrurmshingla National Park (MOAF, DoFPS), Bumthang as Assistant Forester from 2004-2009. He holds a firm interest in wildlife conservation. Mr. Ugyen is a recipient of Royal Civil Service Awards from His Majesty 5th King in 2015.

Mrs. Kinley Dema is the Assistant Administrative and PA to the Director for Bhutan Ecological Society, based in Thimphu. Before joining Bhutan Ecological Society, she worked as an Administrative Support staff at Thrumshingla National Park, DoFPS from 2001 to 2011 and later on she joined Ugyen Wangchuk Institute for Conservation and Environmental Research under the same department from 2012 to 2017 as an Administrative support staff. During her 17 years service to the Government, she worked with dedication to serve the Druk Tas wa Sum.

He received his B.Sc degree in the field of Forestry form the University of the Philippines, Los Banos. His keen interest in research includes forest ecology, environmental forestry and climate change.

Ms. Tandin Zangmo has been serving for the Bhutan Ecological Society since 2017. She graduated from Royal Thimphu College with a Bachelors Degree in English and Environmental Studies. She also did an internship at Nature Recreation and Ecotourism Division under the Department of Forest and Park Services before joining the Society.

She is an active member of Community-Based Scouts (CBS) and also a member of the Forest Fire Volunteer Program. She visited Japan in 2013 representing our country for a cultural exchange program.

She believes that together, we all can preserve the constitutional mandate of maintaining 60 per cent of the country’s land area under forest cover for all times to come.

Ms. Tshering Dema graduated from Kathmandu University in 2016 with a bachelor degree in Development Studies. During her undergrad studies, she received an opportunity to participate in the South Asian Youth Conference in 2013. Tshering interned at BES prior to being appointed as an Assistant Program Officer. She is more interested in field and research work. She has the zeal to give her best and the interest to work on peace, environmental issues and social harmony.

Mr. Sangay Thinley is an Asst. Finance Officer at the Bhutan Ecological Society. He graduated with a Bachelors in Business Administration in Marketing from Gedu College of Business Studies, under the Royal University of Bhutan. Sangay Thinley has a keen interest in environmental conservation, and natural resources economics and management.

Utsav is an engineer with years of experience in energy sector automation and telecommunications. He also specializes in creative consultancy services, and his current interests are in promoting science outreach through multimedia channels